With the Core Ocean AiO, Alphacool presents an all-in-one solution that, thanks to its excellent price-performance ratio, enables entry into performance-oriented CPU water cooling. The difference to the Eisbaer CPU AiO is that the Ocean All-in-One is not expandable. Adding further components such as GPU coolers, radiators or expansion tanks is not intended here. But also not necessary! The choice of components and the design of the Core Ocean enable a long service life with low maintenance for water cooling of all common mainstream sockets from AMD and Intel.

Aluminium Radiator
Compared to Alphacool's full copper models, the T38 aluminium radiator has additional cooling channels. This technical design allows a significant increase in cooling capacity without restricting the water flow within the radiator. Due to the low height of 38mm, the radiator with single-sided fan assembly fits into the tightest case and enables high-performance water cooling of the CPU.

Core fan
The fan can be regulated from 0 to 2000 rpm via the 4-pin PWM connection. The cable is 40cm long. This allows the fan to be connected to the mainboard or a special controller without the need for additional adapter cables or extensions. At 2000 rpm, it provides an air flow of 92.3 CFM, together with a high static pressure of 2.53mm/H2O. This makes the fan perfect for mounting on radiators of a water cooling system.

Cooler & Pump
As with all Alphacool products, the radiator base is made of copper and is equipped with very fine cooling fins distributed over the entire base. A nozzle plate ensures an accelerated flow over the cooling fins, which increases the cooling performance. The water flow is optimised so that all areas of the cooler base are cooled evenly. The cooler is compatible with all common mainstream sockets from AMD and Intel. The built-in pump has a speed range of 2500 - 3500 RPM (+/- 10%) and can be controlled via PWM. The pump is connected to the mainboard or to an external controller via the existing 4-pin fan connector. This allows the speed range of the pump to be controlled and monitored.

Hoses & Connections
The FEP hoses are 40cm long, sleeved and very flexible. The rotatable 360° connections to the cooler and to the radiator are permanently installed and cannot be replaced. However, the combination of hoses and connectors allows a very variable positioning of the AiO even in the tightest PC case.

Thermal compound
The thermal paste included in the delivery has a thermal conductivity of 7.5 W/mK. The thermal grease does not harden, is particularly suitable for high contact pressures and can be applied perfectly due to the optimally selected viscosity. 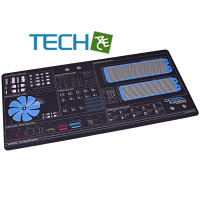 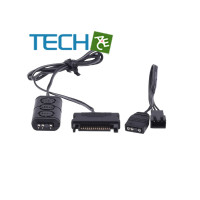 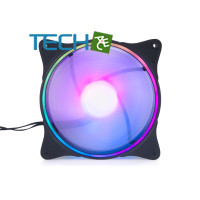 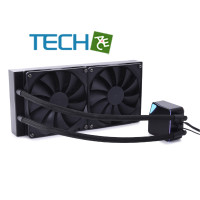